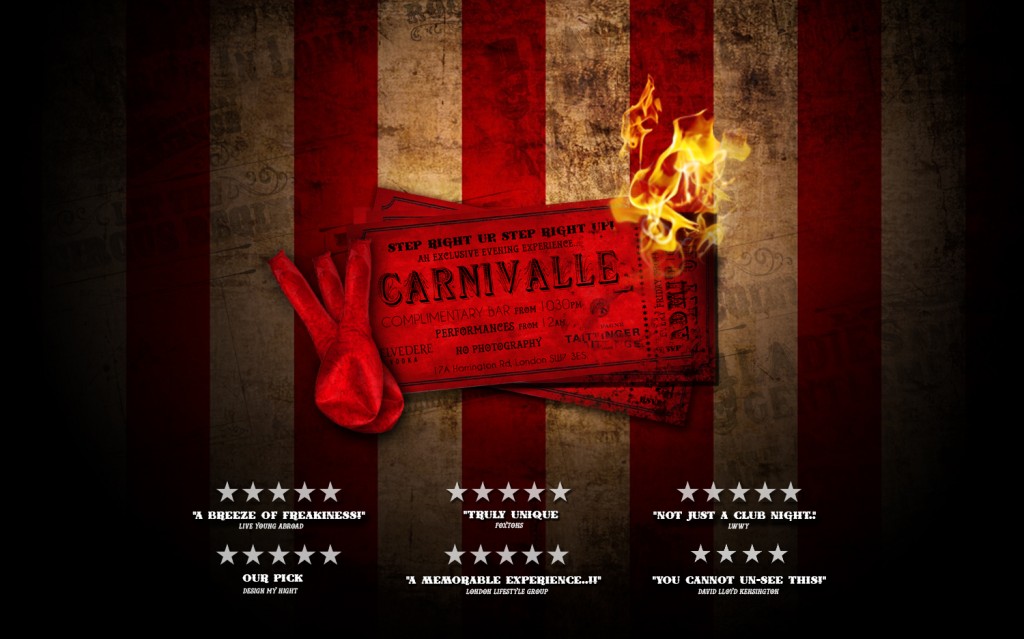 With a selection of circus and variety nightclubs now popping up around the West End, Carnivalle is South Kensington's first unique themed nightclub experience that offers much more than just a club night.

Where Carnivalle stands out immediately is the Internet setting the venue itself is very Internet and can only hold 150 guests which very nights that's tagline is "expect the unexpected" the fact that only a few guests each week will witness an evening of variety make the whole event seem far more intriguing...

You wont find many picture online as photography whilst the performances are on are generally frowned upon however from what we witnessed the entertainment certainly left us shocked!

As you walk down the carpeted steps down into Carnivalle the smell of popcorn immediately hits you and immediately you are offered sweet or salted popcorn from one of the themed staff. Carnivalle certainly gives the impression of a VIP experience as a complementary bar is laid on for all guests for 45 minutes prior to the club night starting which gets you in the mood straight away!

The cocktail menu that we were able to take advantage of included: prosecco, shots and a "rabbit in the hat" shot which changes each week but our way a vibrant blue colour and tasted fantastic!

The layout of the venue suits this type of event well and a raised section at the back acts as a staging area and also become an entertainment area with various carnival games available to pay to win a selection of prizes and drinks. We decided to spin the dice and play shot roulette and won ourselves a bottle of Moet after the first throw! This was topped off with the fact the DJ announced our win to the whole club and sparklers came out from all sides of the club to present us with our winning prize!

This is predominately a club night with entertainment performed throughout the night and the music is a nice changed from the west end and a nice mix of 80s -90s and modern chart hits kept us singing along all night.

Once the first act came out at 12am a bizarrely green haired figured appeared who began to perform various stunt encouraging us to get involved and certainly not for the squeamish! One of the guests stapled playing cards to various body parts whilst another pulled a 7 inch mail out of her nose. I wont go into any more details as it is worth seeing it for yourself but i understand the entertainment changes each week..

This audience interaction is what separates carnival from other circus events in London and at time it is almost like being in Covent Garden and after 3 weeks it has certainly made an impact in the local area and could well become the place to be in an area whgich for many years Boujis has had the monopoly.