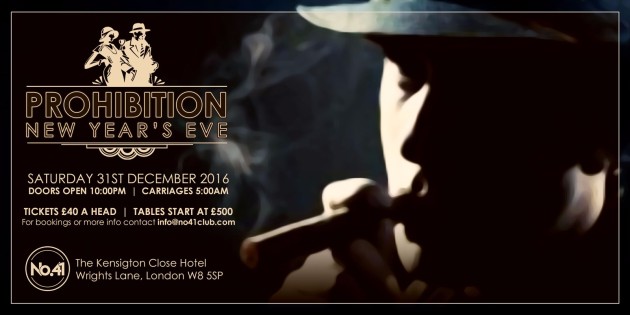 Velvet PR are pleased to be able to offer tickets for this years Club 41 New Years Eve 2016 - 2017 event. Prohibition comes to Chelsea at the glamorous Club 41. Expect an extravagant and unforgettable night to bring in the year 2017 at this incredibly stylish and elegant nightspot. Club 41 is located adjacent to the Kensington Close Hotel, less than a minute walk from High Street Kensington underground station. Knows for its lavish furniture and beautiful architecture, Club 41 will be transformed to bring you the sights and sounds of the prohibition era, but don’t worry the alcohol will be free flowing at this party! Doors open at 10pm and the party goes on until the early hours, coming to a close at 5am Tickets are £30 per person (including a complimentary glass of Prosecco) and tables are available starting at £500 minimum spend.