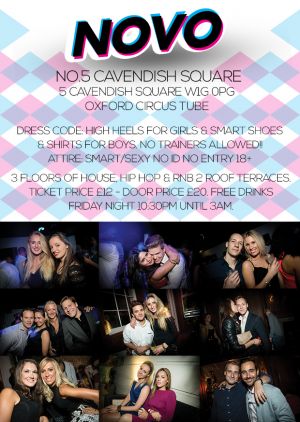 Velvet PR are pleased to announce that we are now selling advance tickets at a discounted rate for the newly relaunched 5Cavendish Square Friday nights this coming Friday, 14 February

The already hugely popular Friday nights now goes under the name Novo and launches January with three floors of the best R&B commercial house and hip-hop music Mayfair has ever seen. No 5 Cavendish Square Fridays is set right in the heart of Mayfair and number 5 Cavendish Fridays are set to blow the club scene away with the launch of this brand-new night