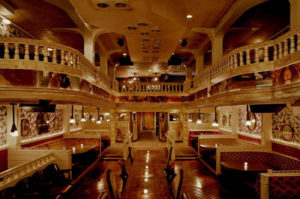 The city of a thousand faces borders welcome you in a new concept club signed the Box. Situated in the heart of London, this famous club offer you not only a single night out but a real show: cabaret and circus shows as the same time as a night club party? Have you ever seen this before? It’s one of the most vogue club of the moment. London, Party, Originalities would also draw people attention… ⦁ Jude Law, Julien Macdonald, George Lamb and Mark Ronson, were spotted at The Boxe. Brooklyn Beckham and Kate Moss leave trendy Soho nightspot The Box. ⦁ Prince Harry, Emma Watson and Keira Knightley have all danced until dawn at the celebrity hotspot. ⦁ Imogen Anthony appeared to forget her self-described 'selfish lover' boyfriend, radio host Kyle Sandilands, enjoying herself on a night out in London on Thursday. ⦁ There are also celebrities like Jude Law, Cara Delevingne, Harry Styles and Rihanna who are spotted there. ⦁ The Box Club attracts only good looking trendy crowd, included Leona Lewis, or Lady gaga.
﻿